Skip to content
The Best of Charleston: Our Top Five Bed & Breakfasts

One of Charleston’s greatest characteristics is its stunning example of Southern architecture. Its beautiful mansions and historic buildings line offer a glimpse of history and add to the classic feeling of the city.

What visitors to Charleston may be thrilled to discover is that you can stay in many of these gorgeous mansions to experience a unique side of Charleston that you wouldn’t get at a hotel. Charleston is host to dozens of bed & breakfasts that offer unmatched hospitality, historical accommodations, and social events.

With the massive number of bed and breakfasts and boutique hotels available, it can feel a little overwhelming as you decide which one is perfect for you. We can help pare down your choices. Here are our top five favorite bed and breakfasts in Charleston. 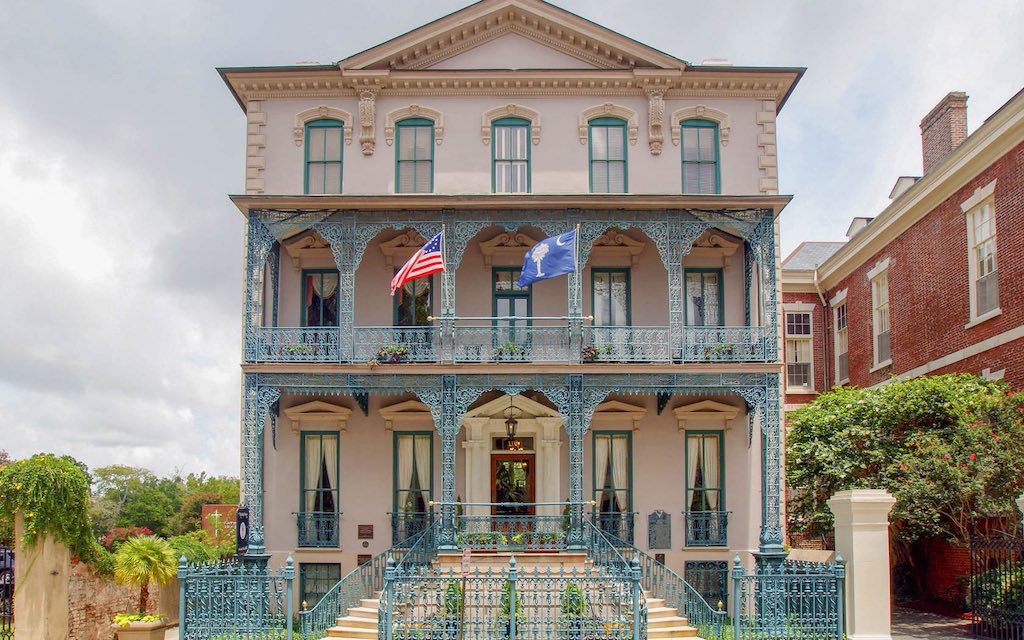 The John Rutledge House Inn, named after its original owner, offers a combination of outstanding hospitality and fascinating history.

A National Historic Landmark, the John Rutledge House Inn was built in 1763. Its owner, John Rutledge, who later went on to become a prominent South Carolina politician, eventually signed the US Constitution. In fact, he helped to draft certain sections of the Constitution in this very house.

Located on Broad Street, the John Rutledge House Inn boasts a convenient locale near tourist destinations and restaurants. A knowledgeable hotel staff can provide plenty of information regarding the surrounding area, making your trip an easy one. This is the perfect spot for those who love history and need a nice, stress-free getaway. “This hotel is a gem!” said one reviewer. “We picked it due to its historical background but have been totally impressed with the hotel itself.” 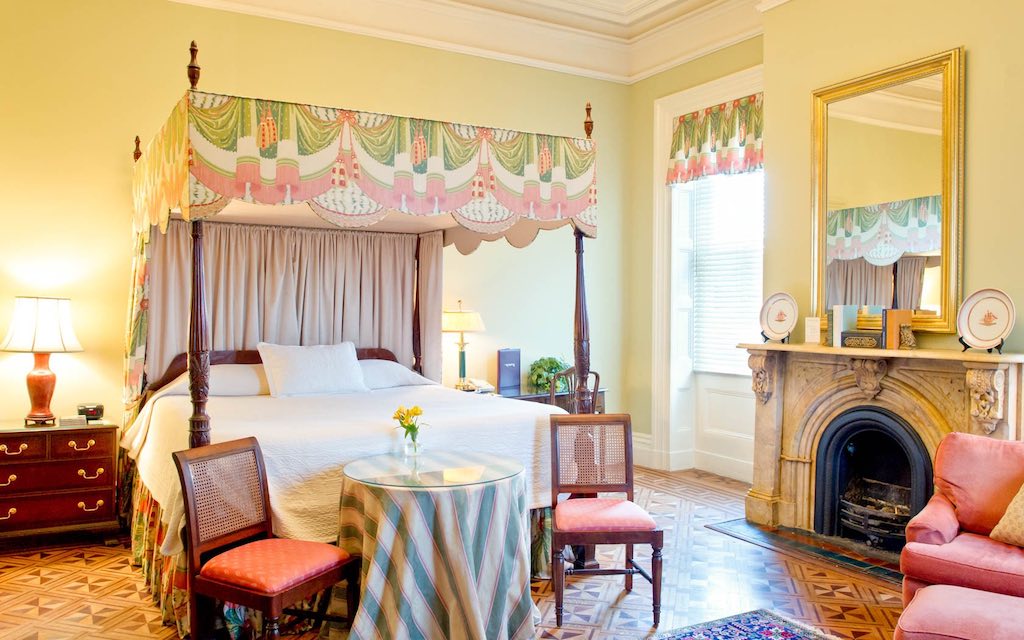 John Rutledge House Inn offers 19 rooms and suites in the main house and carriage houses. Each room has its own unique flare, depending upon what you’re looking for.

The rooms range in size from standard (like a large hotel room) to deluxe (up to 900 square feet in size). Depending on your room, you’ll love additions like canopy beds, Italian marble gas fireplaces, period antiques, and more. A perfect combination of antique styles and modern amenities, you’ll feel as though you’ve stepped back in time while benefiting from modern comforts, like WiFi and flat-screen TVs.

Every afternoon, guests can enjoy a complimentary tea time and social hour with other guests. They also offer a number of packages, including an elopement package and a girls’ trip getaway package.

Another historical gem, the Governor’s House Inn was built in 1760 by James Laurens. Preferring to return to England at the onset of the Revolutionary War, he only lived in the home for a few short years, leaving the estate to his brother, Henry.

Unlike his brother, Henry Laurens dove into the revolution effort and worked closely with George Washington. The British eventually captured him and took him to England. He spent the rest of the war in the Tower of London as the only American prisoner.

The most famous owner and namesake, Edward Rutledge, bought the home from the Laurens family. He claims fame as the youngest signer of the Declaration of Independence, and he ultimately became the 10th governor of South Carolina.

Over the years, the inn changed hands with a number of prominent Charlestonians before it became an inn in 1998. Over the course of its history, it cultivated an impressive visitors list, including Teddy Roosevelt, Taft, and Ford.

Here, you’ll get a true bed & breakfast experience. “We felt like we were with family,” one reviewer reported. “We smoked cigars and drank aged cognac on the porch and they even prepared a special dinner for us, twice.” This is one B&B where the inn itself is a big part of your Charleston experience. 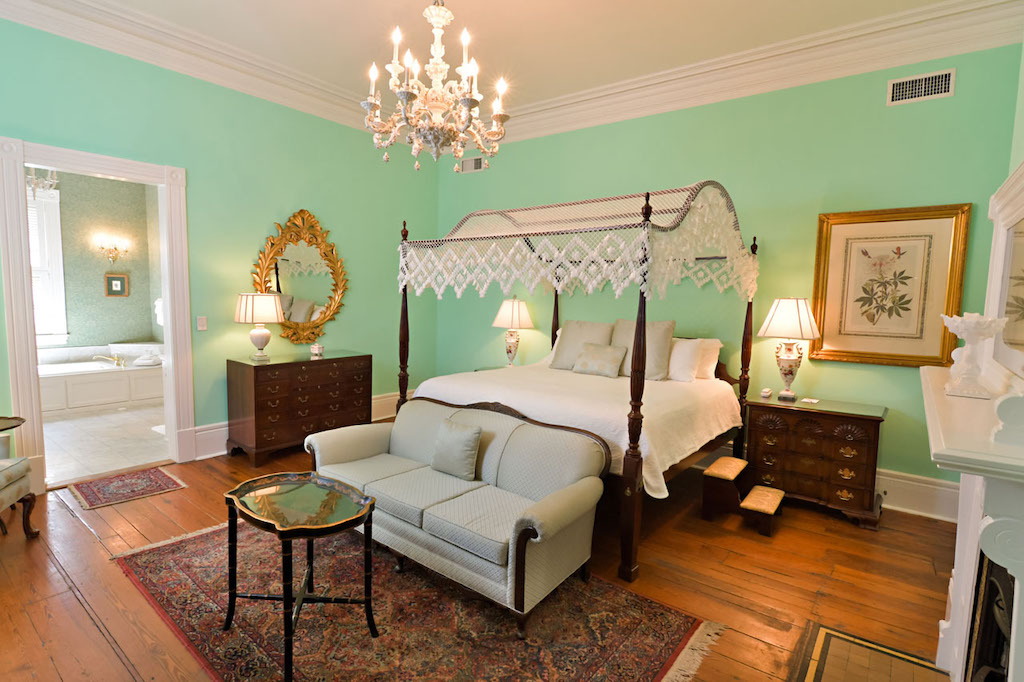 Eleven unique rooms and suites comprise The Governor’s House Inn. Depending on the guestroom you choose, canopy beds, beautiful hardwood floors, and a mixture of antiques and modern accents number some of the many amenities for you to enjoy.

While they do not offer breakfast, they provide vouchers to breakfast spots within walking distance—many of which are Charleston’s best.

In the late afternoon, interact with other guests at their complimentary wine and cheese social. You can also take advantage of different tour packages, like a Best of Charleston package, and nice touches like champagne and chocolate-covered strawberries and in-house spa services. 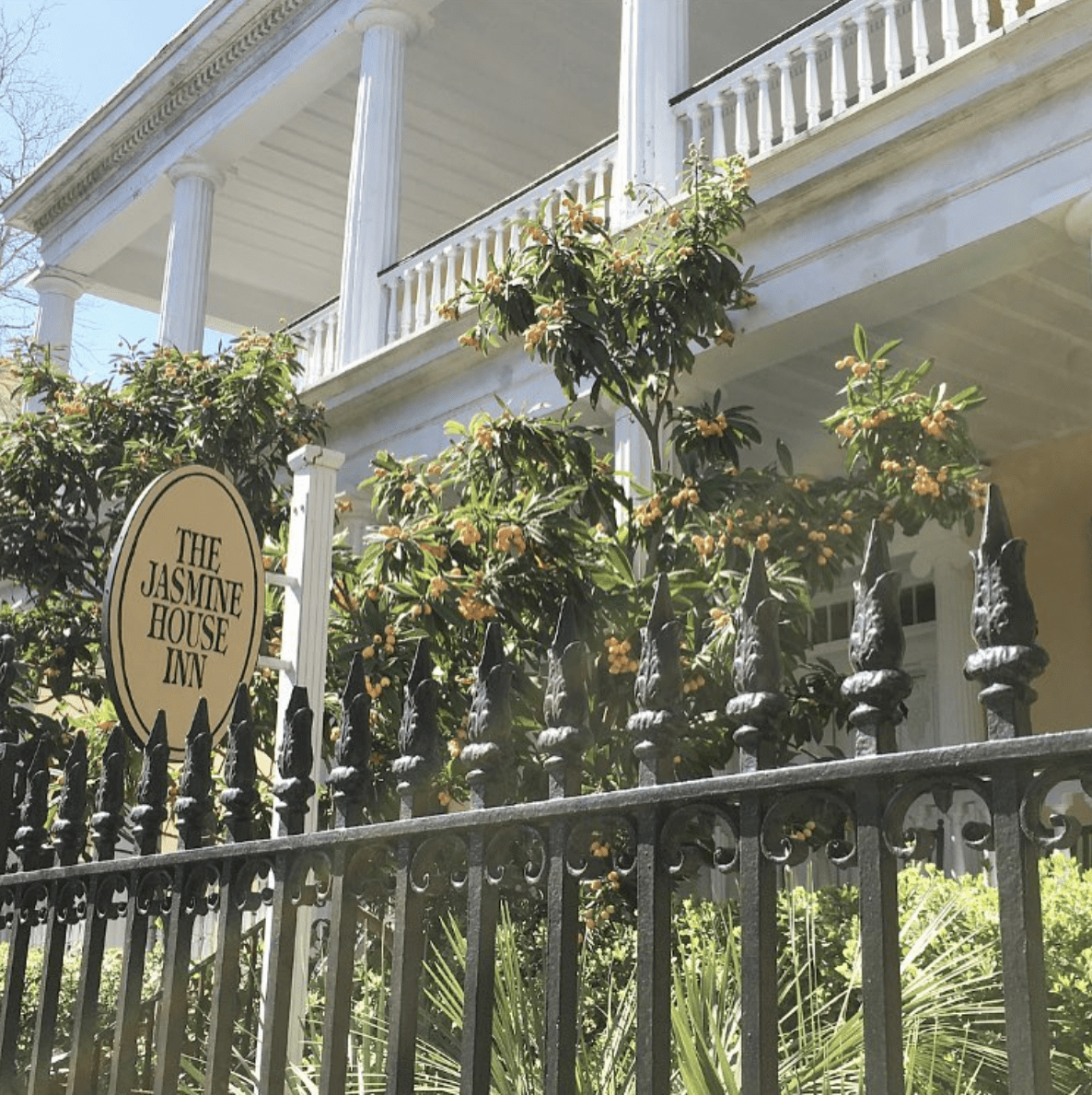 Built in 1834 by Benjamin F. Smith, the Jasmine House Inn is located in Charleston’s rich Ansonborough neighborhood. Here, you’ll be surrounded by many beautiful, Southern-style mansions in a pristine area.

The neighborhood is named after Lord Anson of England who won the area in a poker game. The Jasmine House itself boasts a number of prominent Charlestonian owners over the years before being transformed into an inn.

The draw of The Jasmine House is not so much in the history of the location itself but its beautiful design and gorgeous garden and courtyard. A prominent and well-known building, it remains a beautiful fixture and a testament to the architectural ingenuity of Southern design. 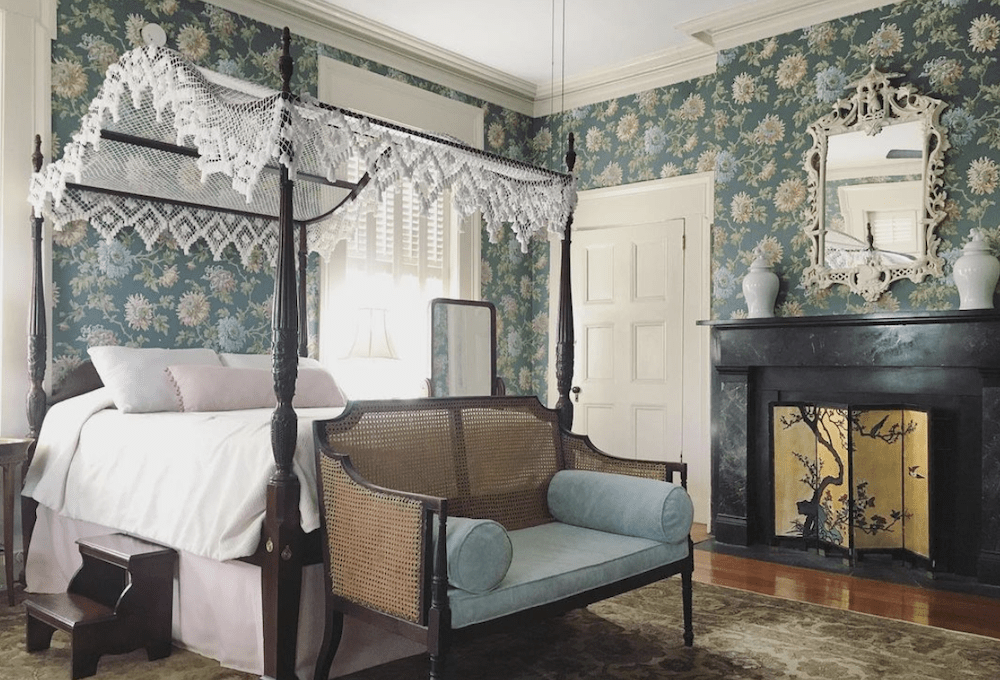 You can choose between 7 guest rooms in the main house and 4 rooms in the carriage house. These include some adult-only room options and suites that are ideal for families.

Enjoy a nice continental breakfast in the mornings and a wine and cheese reception in the evenings. The private garden and courtyard offers a peaceful place where you can read a book and relax throughout the day. Because of the large size, you can be sure to find some privacy. “The best part is that it was never crowded. It was full according to the inn’s employees, but I rarely saw anyone. Almost felt like it was my own massive mansion!” raved one reviewer. 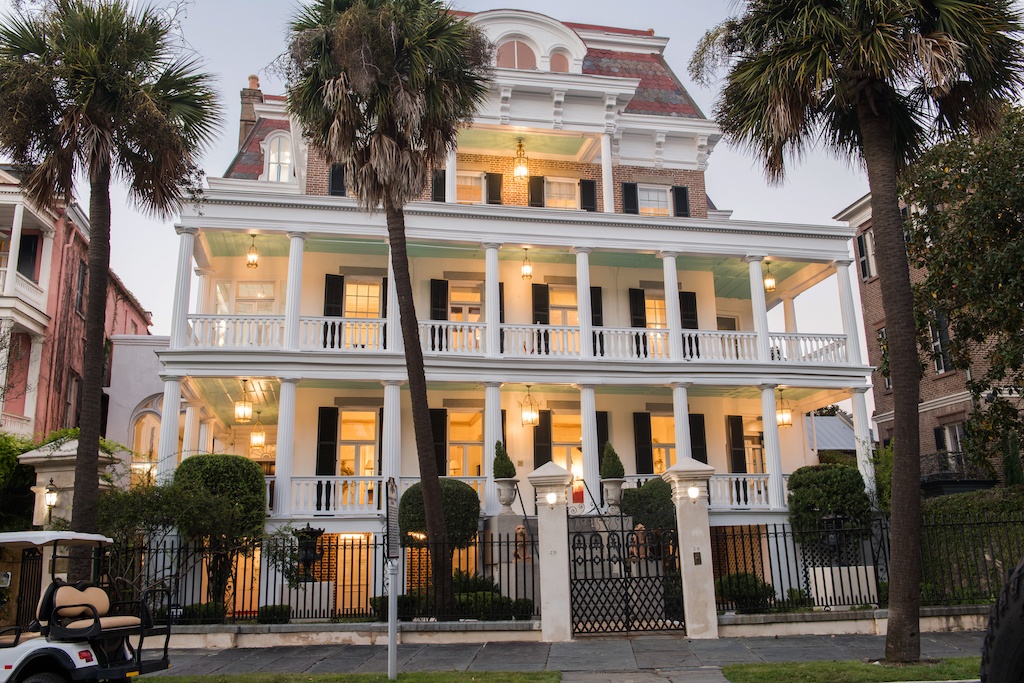 The 20 South Battery bed and breakfast boasts a unique history with many different owners.

Built in 1843, the first two decades of its existence went by without incident. In 1863, during the Siege of Charleston, it received significant damage. In 1870, new owner Colonel Landers of the Union Army commissioned famed Charlestonian designer John Henry Devereux to renovate the building. The new design followed fashionable New York trends.

Since then, 20 South Battery has experienced many different seasons. Under Colonel Landers’ ownership, many US senators and prominent New York politicians visited the site. After the Siminds family purchased the property in 1912, it saw the formation of the Society for the Preservation of Old Dwellings—the country’s oldest preservation society. In the 1920s, it became a popular inn for US Navy servicemen, and in the ‘60s and ‘70s, it was converted into apartments for college students.

Later, it was turned into the Battery Carriage House Inn in the ‘80s until a massive hurricane in 1989 caused some damage. Finally, 2018 saw restoration, the inn became what we know and love today. It even won the Coraopolis Award for its preservation efforts.

“This is one of Charleston’s hidden gems I would highly recommend to anyone staying in Charleston,” said one reviewer. 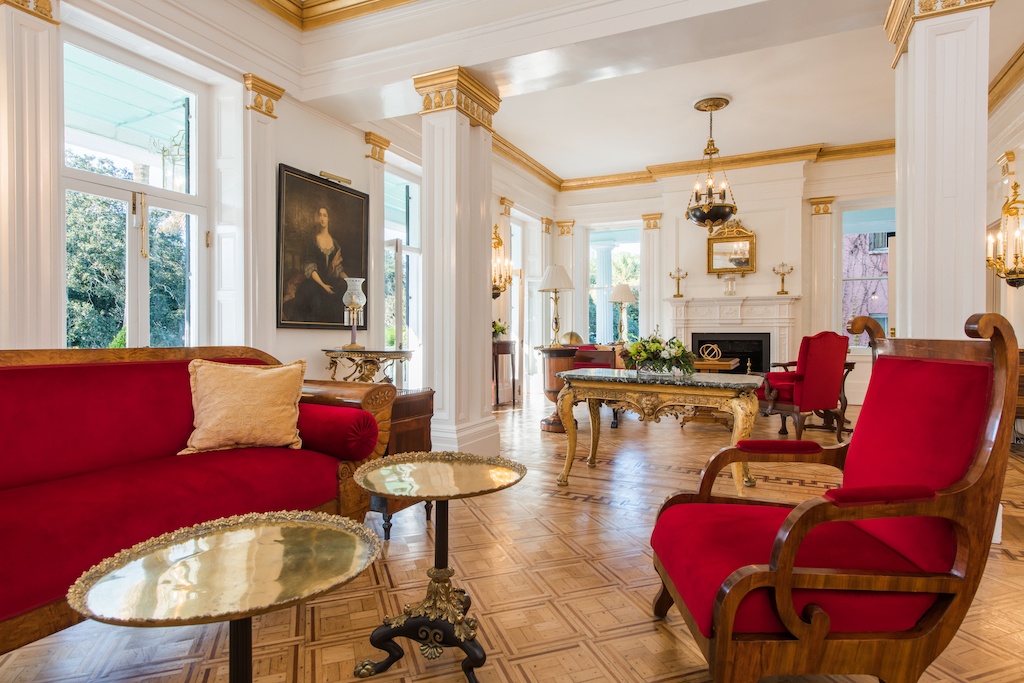 Here, you’ll find a variety of suites and guest rooms to enjoy. Certain suites offer additional amenities like complimentary snacks and after-dinner beverages as part of their concierge-level offerings.

You can also look forward to a daily wine and cheese reception and complimentary European-style breakfast. To take away the stress of vacation planning, look into their packages, including a beach package and a historic Charleston package. 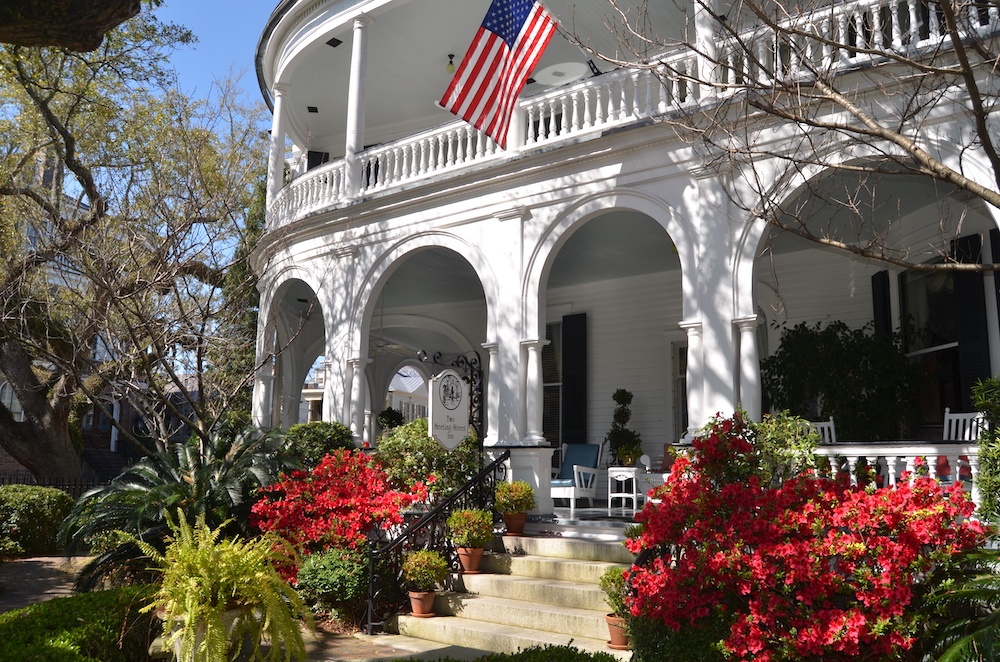 The perfect location for a romantic getaway, true love permeates the lore of the Two Meeting Street Inn.

As the story goes, a Charlestonian jeweler, Waring Carrington, fell in love at first sight when he met Martha Williams. Luckily for him, she felt the same way, and the two married in 1890. Martha’s father, a wealthy merchant in Charleston, gave them the money to purchase the home at Meeting Street as a wedding present.

In the ‘40s, the home was turned into a guest house, and it has been an inn ever since.

Located across from the White Point Garden, Two Meeting Street Inn completely embraced its romantic roots. This makes it a popular destination for honeymooners, those celebrating their anniversary, or others looking to reconnect with their partners. “I have been impressed every time that I have been here and look forward to being able to come back again and again,” gushed a reviewer.

But, Two Meeting Street Inn isn’t just for lovers. The gorgeous atmosphere, view of the gardens, and unmatched hospitality create enjoyment for everything.

Two Meeting Street Inn has 9 unique guest rooms. Each room is beautifully decorated and ranges from lovely to extravagant. Depending on your room, you can enjoy patios, antique tubs, and fireplaces.

They also offer afternoon tea for socializing with other guests and a hot breakfast that one reviewer said is “equal to and even better than the dinners we had in three of Charleston`s top 10 restaurants.”

Packages follow the romantic theme, with champagne, chocolate-covered strawberries, and all the other necessities for a romantic experience that you and your partner will remember for a lifetime.

Whether you’re a history buff, looking for the perfect romantic escape, or you simply want to spend some time in one of the quintessential Charleston mansions that you’ve always admired, you’ll be able to find the perfect bed & breakfast in Charleston.

About the Author: Meghan O'Neal